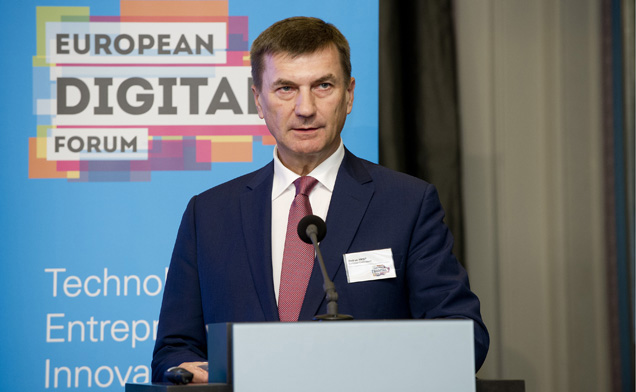 The 2015 European Digital Forum convened under the timely theme How the Digital Single Market Will Power a European Renaissance – and What We Need to Do About It Today. Andrus Ansip, vice-president of the European Commission for the digital single market, delivered The 2015 Guglielmo Marconi Lecture and laid out his vision of a European renaissance fuelled by dramatic leaps in the digital single market before an eclectic audience of leading European thinkers, regulators, entrepreneurs, venture capitalists and Internet aficionados. He listened to the debate animated by leading thinkers and practitioners and offered concluding remarks based on what he heard. Geoff Mulgan, chief executive of Nesta, co-manager with the Lisbon Council of the European Digital Forum, set the scene with a sprightly overview of Europe’s digital challenge –and potential. Later, Bart Becks, CEO and founder of angel.me, a Belgium-based crowdfunding platform and former CEO of Belgacom Skynet SA; Bernard Le Masson, managing director for public service at Accenture Strategy; Ana Segurado Escudero, CEO of Telefónica’s Open Future; and Javier Arias, head European Union representative of Banco Bilbao Vizcaya Argentaria (BBVA) shared their perspectives on how European digitally-led entrepreneurship can boost the digital economy. Earlier in the day, the Forum opened with a High-Level Working Lunch on Making the Investment Plan and the European Strategic Investment Fund a Success. Marjut Santoni, deputy chief executive of the European Investment Fund, presented an array of ideas on how to make European Commission President Jean-Claude Juncker’s €315 billion Investment Plan a success. Miguel Gil-Tertre, member of the cabinet of Jyrki Katainen, vice-president of the European Commission for jobs, growth, investment and competitiveness, served as discussant. Nikita Fahrenholz, CEO and co-founder of Book a Tiger; Daniel Glasner, founder of Quandoo and CRES Internet; Gerard Grech, CEO of Tech City UK; Hervé Le Jouan, CEO and founder of Privowny; Guy Levin, executive director of The Coalition for a Digital Economy (Coadec); and others also intervened in a rich and fascinating debate on how smart policy choices coupled with targeted investment can empower Europe’s tech and web entrepreneurs. The 2015 European Digital Forum is the flagship annual summit of the European Digital Forum, a think tank managed by the Lisbon Council and Nesta, and dedicated to web entrepreneurship and the digital economy.

‹ Growing the Digital Economy> A Transatlantic View
Driving the Hidden Value of Digital Trade ›
We use cookies on our website to give you the most relevant experience by remembering your preferences and repeat visits. By clicking “Accept All”, you consent to the use of ALL the cookies. However, you may visit "Cookie Settings" to provide a controlled consent.
Cookie SettingsAccept All
Manage consent