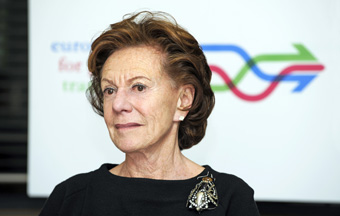 The European Centre for Government Transformation convened an eclectic group to give a first evaluation of The 2015 College of Europe State Transformation Case Studies, prepared by students at the College of Europe (Falcone and Borsellino promotion). Neelie Kroes, special envoy for StartupDelta and former vice-president of the European Commission responsible for the digital agenda, chaired a jury of top civil servants from EU member states. This year, the case studies were selected among the winners and finalists of the European Capital of Innovation Award given by the European Commission’s directorate-general for research and innovation. The projects focus on expanding the circular economy (Paris), developing micro-distribution and macro-blocks (Barcelona), promoting better public services in the innovation ecosystem (Espoo, Finland) and creating a smart users’ city (Groningen). The students are divided into four teams, each of which spent part of the academic year studying the challenges of the chosen agency and making recommendations for scaling up their operations. Later, the high-level jury chaired by Ms Kroes will decide and award The 2015 Public Service Innovation Award to the best overall project. Vice-President Kroes also chaired a working dinner with the Government Executive Innovation Circle, a high-level body of committed public servants and experts, on the challenge of state modernisation. The European Centre for Government Transformation is a tri-partite collaboration between the Lisbon Council, the College of Europe and Accenture. Founded in 2009 as a leading research and practitioner-driven community, the European Centre for Government Transformation is a new type of ideas and solutions hub that recognizes the interdisciplinary nature of state transformation and public-sector modernisation.

‹ The 2015 Energy Union Summit
Empowering SMEs in the Single Market ›
We use cookies on our website to give you the most relevant experience by remembering your preferences and repeat visits. By clicking “Accept All”, you consent to the use of ALL the cookies. However, you may visit "Cookie Settings" to provide a controlled consent.
Cookie SettingsAccept All
Manage consent