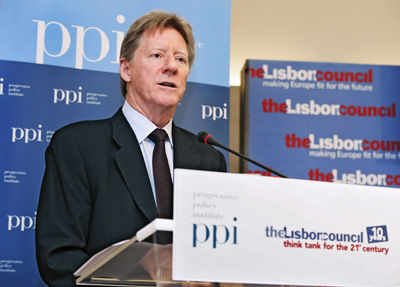 Europe and the United States are both in an urgent quest for new sources of growth. The data-driven economy, and big data in particular, has the potential to transform economies and companies by creating new business opportunities, raising productivity, reducing costs and facilitating new trade flows. Against this backdrop, two leading think tanks – the Progressive Policy Institute (PPI) from the US and the Lisbon Council from Europe – teamed up to host the High-Level Roundtable on Data-Driven Productivity and Trade: Unlocking New Drivers of Growth.

With discussion of a proposed Transatlantic Trade and Investment Partnership agreement between the US and EU well underway, participants analysed the need to lay a regulatory framework for data that will both ensure adequate data protection for citizens and facilitate much-needed gains in job creation, competitiveness and growth on both sides of the Atlantic. To kick off the debate, Dr. Michael Mandel, chief economic strategist at PPI, presented a paper on Data, Trade and Growth, which concluded that trade in data is the fastest rising type of trade in the transatlantic relationship today. Later, Jan Philipp Albrecht, member of the European Parliament and rapporteur for the general data protection regulation; Dimitrios Droutsas, member of the European Parliament and shadow rapporteur for the general data protection regulation; Geert Gladdines, EU adviser, European Small Business Alliance (ESBA); Damien Levie, head of unit, trade relations with the US and Canada at the European Commission’s directorate general for trade; Bernie McKay, chief public policy officer at Intuit; Greg Rafert, manager at Analysis Group and co-author of The Impact of the Data Protection Regulation in the European Union; Siada El Ramly, director-general, European Digital Media Association (EDiMA); Marietje Schaake, member of the European Parliament; Steven Spittaels, associate director at McKinsey & Company; Zoran Stančič, deputy director-general of the European Commission’s directorate-general for communications networks, content and technology (DG-CONNECT); and James Waterworth, vice-president of the Computer and Communications Industry Association (CCIA), intervened in a rich and fascinating debate. The roundtable was hosted by the Single Market Entrepreneurs Centre, a centre of excellence managed by the Lisbon Council.

‹ Digital and Web Literacy Deep-Dive
Transforming Government, Driving Innovation ›
We use cookies on our website to give you the most relevant experience by remembering your preferences and repeat visits. By clicking “Accept All”, you consent to the use of ALL the cookies. However, you may visit "Cookie Settings" to provide a controlled consent.
Cookie SettingsAccept All
Manage consent