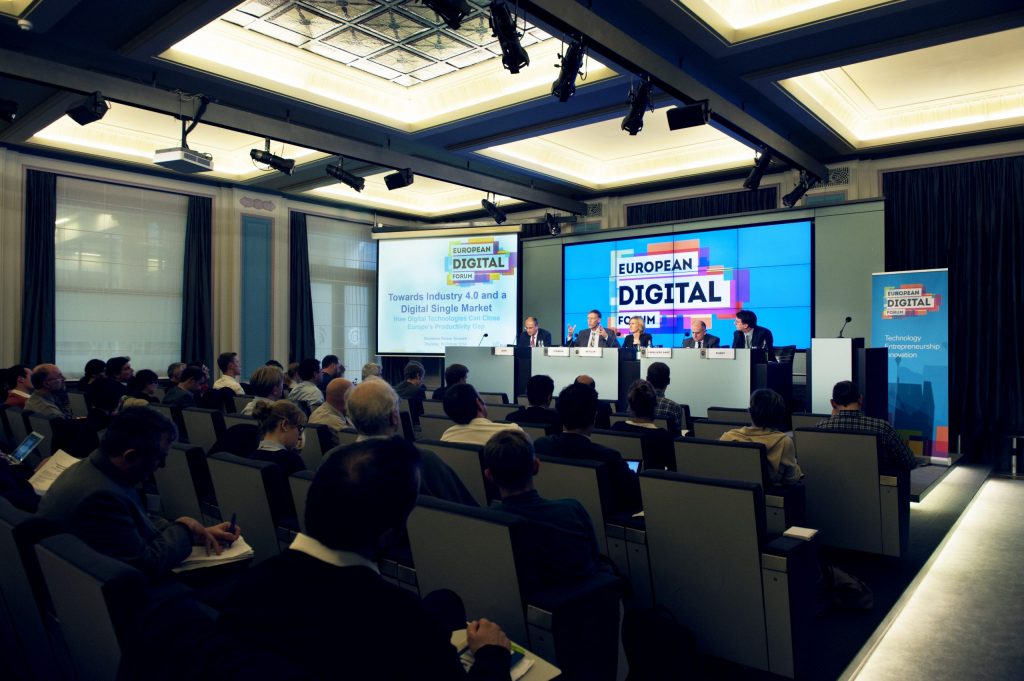 The European Digital Forum convened a high-level roundtable on Towards Industry 4.0 and a Digital Single Market: How Digital Technologies Can Close Europe’s Productivity Gap. Two of the world’s foremost experts on information technology and productivity, Bart Van Ark, executive vice-president, chief economist and chief strategy officer of The Conference Board and author of Productivity and Digitalisation in Europe: Paving the Road to Faster Growth and Robert D. Atkinson, president of The Information Technology and Innovation Foundation and co-author of Raising European Productivity Growth Through ICT, presented their research and led a discussion on how digitalisation drives productivity, growth and jobs. Francisco Caballero Sanz, chief economist and head of unit for industrial competitiveness for growth at the European Commission’s DG enterprise and industry; Wolfgang Dorst, head of department, Industry 4.0 at Bitkom; Gerard de Graaf, director for co-ordination at the European Commission’s DG communication networks, content and technology; Dennis Kredler, director-general of the European Retail Round Table; Valerie Mocker, senior researcher for startups and entrepreneurship at Nesta; and Mark Purdy, managing director and chief economist of Accenture’s institute for high performance, also intervened, sharing their recent research and latest thinking on Europe’s economic situation and the role the digital economy can play in helping to overcome it. Marietje Schaake, member of the European Parliament, weighed in with a special video message, giving the European Parliament’s perspective and announcing several important European Parliament initiatives aimed at driving the digital agenda forward. The high-level roundtable was hosted by the European Digital Forum, a think tank managed by the Lisbon Council and Nesta, in collaboration with the European Commission’s Startup Europe initiative.

‹ Growing the Transatlantic Digital Economy
The 2014 European Summit for Government Transformation ›
We use cookies on our website to give you the most relevant experience by remembering your preferences and repeat visits. By clicking “Accept All”, you consent to the use of ALL the cookies. However, you may visit "Cookie Settings" to provide a controlled consent.
Cookie SettingsAccept All
Manage consent