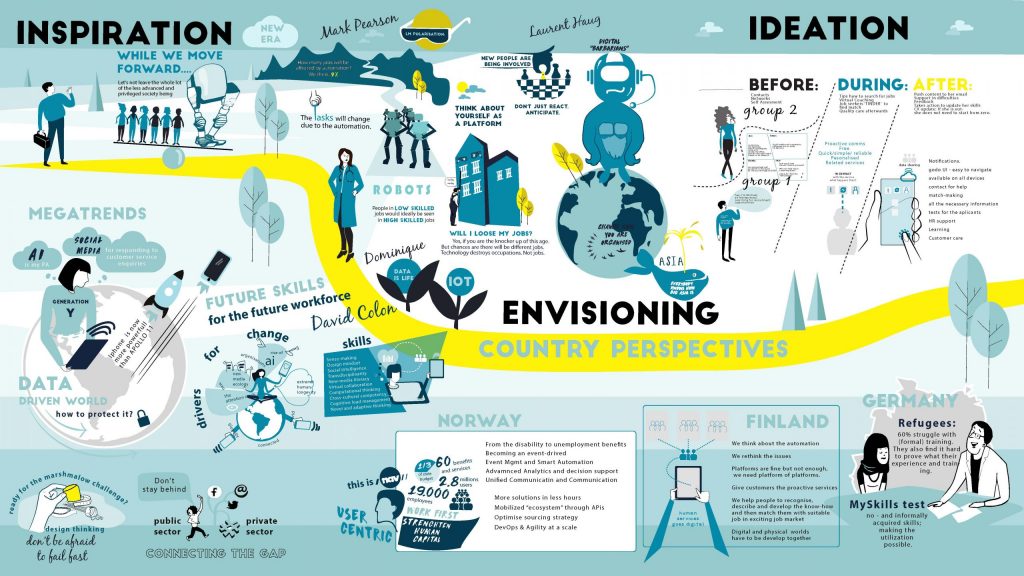 The European Centre for Government Transformation convened the High-Level Innovation Summit on Delivering Human Services in a Digital World in the Paris Innovation Centre, a state of the art, multi-disciplinary centre comprising strategists, public sector specialists, designers and programmers. The day-long summit brought together an eclectic mix of high-level civil servants and thought leaders from, inter alia, Finland, France, Germany, Ireland, Italy, Norway, Singapore and Switzerland. Laurent Haug, director of Monito, contributing editor to Wired-UK and Switzerland-based serial investor, delivered the keynote and led a fascinating discussion on the challenge and opportunity offered by the digital era. Mark Pearson, deputy director for employment, labour and social affairs at the Organisation for Economic Co-operation and Development (OECD), presented the highlights of Employment Outlook 2017 and shared his thoughts on the future of work; David Colon, professor and educational director at Sciences Po, described the skills challenges of tomorrow; and Dominique La Salle, director for social security at the International Social Security Association (ISSA), outlined his vision for social security agencies in the fast-emerging digital economy. Later, Anja Block, employment expert at the Bundesagentur für Arbeit in Germany; Vesa Jouppila, development director at KEHA-keskus, the development and administrative centre for the Centres for Economic Development, Transport and the Environment in Finland; Torbjørn Larsen, chief information officer at the Norwegian Labour and Welfare Administration (NAV); and Mikko Rantahalme, digitalisation project director for operational development at KEHA-keskus; also presented fascinating case studies on reform in their agencies, and discussed the spread of best practice throughout this vibrant community. Kristina Naruseviciute and Lina Navickaite, co-founders of Smartup Visuals, served as rapporteurs, presenting a riveting visual narrative of the day in a flowing illustration. The European Centre for Government Transformation is a leading-edge research centre and practitioner-driven community dedicated to providing pragmatic and actionable solutions to government agencies and public-service providers. It was founded in 2009 by the Lisbon Council, Accenture and the College of Europe.

‹ Competition Economics: Prof Renato Nazzini Leads High-Level Working Dinner
Competition Economics: Competition in the Mobile Economy ›
We use cookies on our website to give you the most relevant experience by remembering your preferences and repeat visits. By clicking “Accept All”, you consent to the use of ALL the cookies. However, you may visit "Cookie Settings" to provide a controlled consent.
Cookie SettingsAccept All
Manage consent