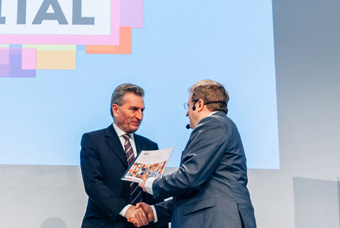 Europe has no shortage of entrepreneurs and good ideas. The question is, how do we translate that into cutting-edge businesses capable of creating more jobs, developing new products, internationalising from day one and conquering markets with their spirit and ingenuity? We thought, “why not ask the best?” The European Digital Forum convened European Startup Ecosystem Day at CeBIT 2016, the global event for digital business, with a high-level, highly interactive session bringing European “unicorns,” top entrepreneurs, leading policymakers, venture capitalists and key startup associations together for a no-holds-barred discussion on developing the right framework conditions for startups to succeed. The session was intellectually informed by The 2016 Startup Nation Scoreboard, a ranking of European countries by progress on implementing the Startup Manifesto in their home country (the study was prepared and crowdsourced by Startup Manifesto Crowdsourcing Community, a team of 33 leading experts in 28 EU member states). European Commissioner Günther Oettinger keynoted and laid down a challenge: “Tell me what I need to do, and together we will do it.” Philipp Kreibohm, managing director and co-founder of Home24 (a German “unicorn” founded in 2012 and now valued at more than €1 billion) and Rubin Ritter, co-CEO of Zalando (Germany’s wildly successful online clothing store, started in 2008, with €3 billion of sales in 2015) joined a high-level CEO panel including Karen Boers, president of the European Startup Network and co-founder of Startups.be, and Andreea Wade, CEO and co-founder of Opening.io. Later, in a highly interactive workshop, leading entrepreneurs, startup associations and authors of national startup manifestos met to discuss the key challenges facing entrepreneurs in 2016 – and the path to better roadmaps and policy recommendations. David Osimo, director and co-founder of Open Evidence and principal author of The 2016 Startup Nation Scoreboard, discussed the potential and challenges of crowdsourcing policy and policymaking.