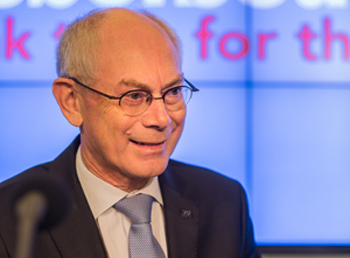 On the eve of the October European Council devoted to innovation and the digital agenda, the Lisbon Council convened The 2013 Innovation Summit. Highlights included the launch of Plan I(nnovation) for Europe: Delivering Innovation-Led, Digitally-Powered Growth, a new publication produced by the Lisbon Council and Nesta, Europe’s leading innovation foundation. The policy brief proposed a seven point agenda for making Europe “the best place in the world to innovate.”

Herman Van Rompuy, president of the European Council, delivered The 2013 Guglielmo Marconi Lecture, to a rapt audience. Carlo d’Asaro Biondo, vice-president of Google; John Bell, head of cabinet of European Commissioner Máire Geoghegan-Quinn; Dainius Pavalkis, minister for education and science of Lithuania and acting chair of the Competitiveness Council of the European Union (research); Nico Perez, co-founder of Mixcloud and young adviser to Neelie Kroes, vice-president and European commissioner in charge of the digital agenda: Desirée van Welsum, economist and programme lead for business scenarios at the Conference Board; Stian Westlake, executive director for policy and research at Nesta and co-author of Plan I(nnovation) for Europe: Delivering Innovation-Led, Digitally-Powered Growth; and Andrew W. Wyckoff, director for science, technology and industry at the Organisation for Economic Co-operation and Development, joined the lively discussion on how to drive forward innovation and digital advancement in Europe.

The OECD also used the occasion to launch Supporting Investment in Knowledge Capital, Growth and Innovation, a new report on the role of knowledge-based capital as a new source of growth. The event was held under the patronage of the Lithuanian Presidency of the Council of the European Union. It was hosted by the Single Market Entrepreneurs Centre, a centre of excellence managed by the Lisbon Council and aimed at shedding light on the role SMEs play in the European single market – and the way the single market can help SMEs deliver more growth and jobs to Europe’s economy. The SME Centre was founded in 2012 by the Lisbon Council and Google.

‹ Don Tapscott on the Digital Economy: Making It Happen
Economic Growth in the European Union ›