Crises are the handmaidens of change, and few moments demonstrate this more than the recent turmoil brought on by COVID-19, social distancing and economic lockdown.

For starters, the crisis clearly showed the necessity of having a good social-welfare system; workers from countries with good systems were no more or less immune to redundancies or the virus; but much of their pain was mitigated by effective state assistance and well-timed benefits which brought aid at moments that were crucial to them.

But the crisis also exposed the gaping holes in Europe’s social safety net. Across Europe, most workers and employees are entitled to short-time working allowance and unemployment benefits, both of which were heavily used to buffer the effects of the crisis. However, large gaps in coverage became apparent for any work that deviated from this norm. In many countries, the self-employed and micro-business owners – an increasingly large segment of the modern workforce – were not covered at all by the standard system. Many got into serious financial difficulties. Some managed to hold on to their businesses thanks to hard work and difficult decisions. But the loss of income and the strain on families and the employees those businesses support could be immense.

One lesson to be drawn from this crisis is that policymakers should create comprehensive unemployment insurance for the self-employed. In contrast to hastily constructed emergency packages, this would guarantee reliable conditions from the outset – in terms of benefits, conditions and financing. Since social security should apply universally, it is all the more important to work out rules that are practicable for the self-employed, including options for short-time work, as this paper from the Institute for Employment Research (IAB) at the German Federal Employment Agency argues.

People doing so-called “platform work” face the largest gaps in social-protection as research such as from the European Commission’s Joint Research Centre has shown. In the years before the pandemic, more and more workers were choosing this kind of work. Platforms play an important role in matching job availability and worker needs in the labour market. The resulting flexibility is good for employers – and for some employees; the possibility of structuring work around a flexible package of short-term gigs appeals to many workers, including those who may be balancing family or other commitments unknown to previous generations. But one of the difficulties comes in the massive disparity in benefits available for the one and not for the other.

The crisis and digitalisation made evident the need for better social protection for platform workers and the self-employed. But it also opened up the path to urgent, more imaginative ways of insuring those workers and guaranteeing that security reaches the places and pockets where it is needed most. Several novel ideas are in circulation, including, most notably, the Digital Social Security (DSS) system recently described in a Hans Böckler Stiftung paper. 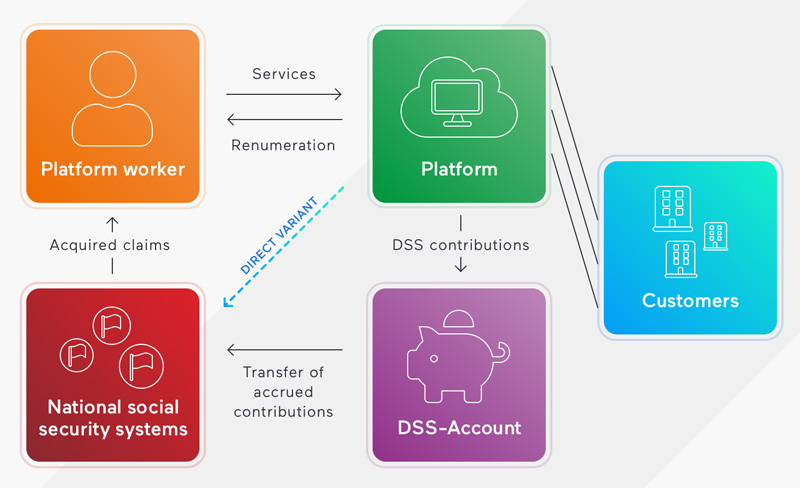 Under this plan, a digital mechanism would be attached directly to all existing platforms. It would automatically withhold a certain percentage of remuneration as a social contribution to the “DSS account” of a platform worker each time a job is completed. By integrating the DSS mechanism directly into the platform, an effective pay-as-you-go procedure for platform work would come into existence. The DSS accounts themselves could accumulate contributions from a person’s platform activities and regularly transfer those contributions to the relevant national social security system where personal claims could be generated. Platform workers would gain access to the social benefit system, and, provided it was handled equitably and well, those already paying in would have no grounds to dispute the arrival of a new and important cohort of workers into the system.

DSS represents a system for the fourth wave of industrialisation: While standards of protection and social security were targeted to the companies in the first wave, now it is key to target the new central actors, the platforms. If successful, the system could be extended to include freelancers, perhaps united behind a new and improved trans-national e-invoicing system.

Another idea is the social security wallet, a proposal spelled out in The Life Account, a 2013 book published by Libera, the Finnish think tank. Under this system, individuals would pay additional social contributions into a personal DSS account on top of the pre-set and mandatory social insurance level. This would support accruing pre-tax capital as a cushion against a downturn in the job market or as a form of long-term savings. In other words, it would increase the flexibility and usefulness of social protection, making it accessible to workers throughout their life and re-defining what “need” might mean in a world built on change and unpredictability. 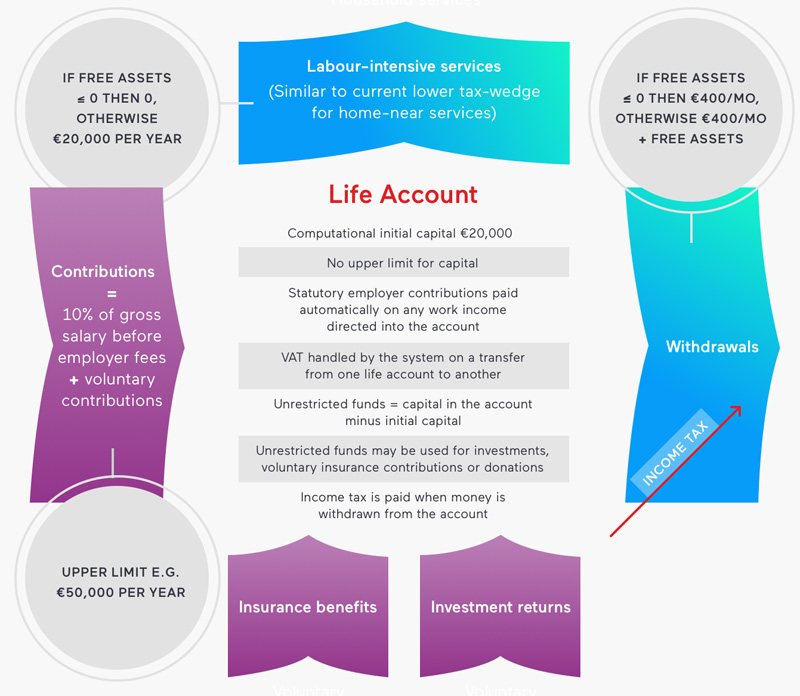 A social security wallet could permit the combination of gig or self-earned income with a social-security benefit; a concept similar to the principle behind the universal basic income. It would increase the incentives for work and entrepreneurship as the level of social protection would not decrease with job or entrepreneurial activity. Unlike a basic-income system, however, an individual would not be incentivised to withdraw benefits from her or his personal account in times when she or he already has enough pay. The sum of paid-in contributions would accrue for future needs, such as retirement, or, under certain conditions, to finance a business startup or pursue a job-related training scheme.

Elina Valtonen is a member of the Parliament of Finland since 2014. She currently serves as deputy head of Kokoomus, the National Coalition Party (EPP). Enzo Weber is head of the forecast and macro-economic analysis at the Institute for Employment Research of the German Federal Employment Agency in Nuremberg and holds the chair of empirical economics at the University of Regensburg. They write here in a personal capacity.